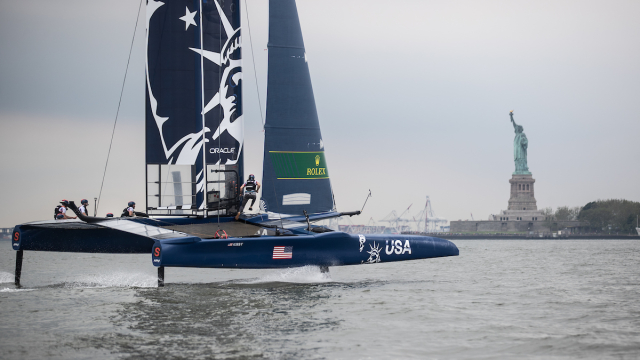 The U.S. SailGP Team hits the Hudson for the first time

With four days until SailGP's New York racing debut, the United States SailGP Team made a splash on the Hudson when its F50 racing catamaran flew across the city’s waters for the very first time. 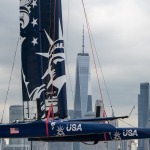 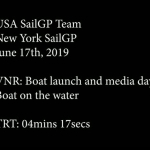 NEW YORK – June 17, 2019 – With four days until SailGP's New York racing debut, the United States SailGP Team made a splash on the Hudson when its F50 racing catamaran flew across the city’s waters for the very first time.

National teams representing the United States, Australia, China, France, Great Britain and Japan will all race in identical hydrofoiling catamarans – known as the F50 – as they battle for the New York SailGP title on Friday, June 21 and Saturday, June 22 from 5 p.m. to 6.30 p.m.

Nicknamed “Lady Liberty,” the U.S. SailGP Team boat proudly displays an image of the Statue of Liberty on its 78-foot wingsail and on both sides of the hull, adding patriotic flair to the boat sailed by an all-American crew.

The first of the league’s six F50s to arrive in New York waters, the U.S. SailGP Team grabbed the attention of shore-side and on-water viewers alike as it sped by. The hydrofoiling F50 features cutting-edge technology that has been in development for nearly 10 years and is capable of reaching speeds never before seen in sailing competition.

“It feels great to be in New York sailing in front of that iconic skyline,” said helmsman Rome Kirby. “The team is looking forward to giving spectators an experience to remember --- and continuing our climb up the overall leaderboard.”

SailGP is sailing redefined, offering the next generation of high-adrenaline, competitive sailing. Bringing the sport closer to fans than ever before, spectators in New York will be afforded the opportunity to witness the action up close as teams go head-to-head in a thrilling battle.

Currently, the Australia SailGP Team helmed by sailing legend Tom Slingsby sits atop the rankings, with Japan nipping at the Aussies’ heels. The U.S. SailGP Team sits in fourth place.

The Hudson River, known for the changing wind shifts through the Manhattan skyscrapers, strong currents and tidal flow, will test the world-class athletes to their limits. Competing in a total of five short-format fleet races over the two-day period, the top two teams will face off in a match race finale on Saturday, June 21 to determine the New York SailGP champion.

The New York SailGP Race Village, located at Brookfield Place in Battery Park City, will serve as the center of the festivities, an ideal place to take in the race action and cheer on the national teams. Visitors will be able feel the buzz and excited of this new, global event, with access to big screens showing live race coverage and commentary, concessions, the official merchandise shop, entertainment (including the awards ceremony and athlete appearances) and other activities.

While the SailGP Race Village is free to the public, special ticketed on-water packages are available to enhance the SailGP experience, offering fans in New York the opportunity to get a front-row seat for the action.

SailGP has partnered with Circle Line Sightseeing Cruises, World Yacht and Classic Harbor Line to provide three premium on-water experiences. Exclusive ticket packages are being offered aboard three Official Spectator Boats – The Liberty, Princess, and Manhattan II – all positioned on the edge of the racecourse, guaranteeing the closest viewing of the action.

Tickets are available at SailGP.com/NewYork.

The SailGP APP – a next generation immersive experience that puts fans in control of the action – provides an inside track to racing. Available free via the App Store and the Google Play Store, fans can view live data and video from the thrilling races and personalize the boats, camera angles and data that features in their feeds.