Sea of color hits the Hudson 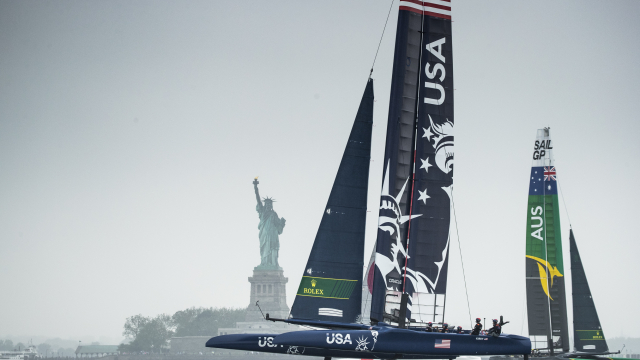 The six national teams hit the Hudson for the first time

New Yorkers got a sneak preview of what to expect when SailGP makes its highly anticipated debut on the lower Hudson River this weekend, as all six SailGP teams today hit the racecourse together. 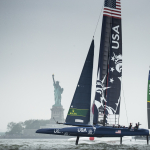 NEW YORK – June 19, 2019 – New Yorkers got a sneak preview of what to expect when SailGP makes its highly anticipated debut on the lower Hudson River this weekend, as all six SailGP teams today hit the racecourse together.

“We are planning to come out swinging here in New York,” said Kirby. “In San Francisco, we made massive improvements and were nipping at the heels of the leaders, leading in many of the races. We can’t wait to race for real on the Hudson River and put on a great show for our fans. It’s anyone’s race out there and we plan to give it our all.”

The showdown begins at 5 p.m. on both Friday, June 21 and Saturday, June 22. All six teams will compete in identical supercharged, hydrofoiling F50 catamarans, engineered to fly across the water at speeds never before seen in sailing competition.

Slingsby's team is ready to show off for the crowd lining the waterfront at Battery Park City.

“I’m most excited to see the crowds here in New York," he said. "The racing will be very close to the shoreline, and we'll be able to hear the cheering."

The New York SailGP Race Village, located at Brookfield Place in Battery Park City, will serve as the center of the festivities, an ideal place to take in the race action and cheer on the national teams. Visitors will be able feel the buzz and excitement around this new, global event, with access to big screens showing live race coverage and commentary, concessions, the official merchandise shop, entertainment (including the awards ceremony and athlete appearances), and other activities.

For fans who wish to ‘feel the spray’ from SailGP’s supercharged catamarans as they fly around the racecourse, SailGP is providing three premium ticketed on-water experiences. Limited tickets are still available at SailGP.com/NewYork.