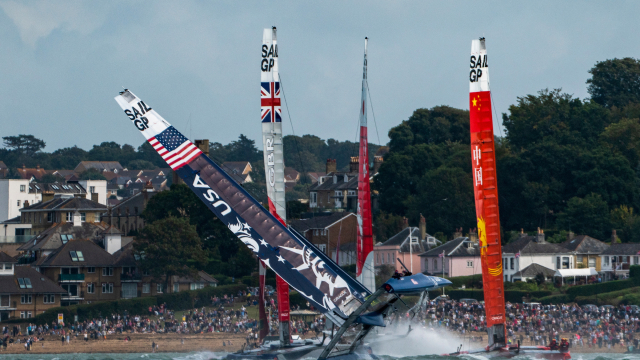 SailGP returns to Cowes for Season 2

F50s return to Cowes, Isle of Wight, where historic speeds were reached in 2019

Following its European debut event last year that resulted in some of the most dramatic moments of Season 1, SailGP is returning to the UK in Season 2. On August 14-15, the world’s fastest sail racing boats will compete on the Solent, where sailing’s elusive 50-knot speed barrier was eclipsed in the inaugural season. Cowes SailGP – the fourth stop of SailGP Season 2 – will take place during Cowes Week, and tickets will go on sale in March 2020. 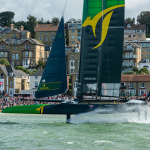 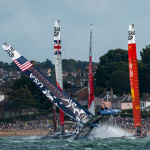 LONDON – November 14, 2019 – Following its European debut event last year that resulted in some of the most dramatic moments of Season 1, SailGP is returning to the UK in Season 2. On August 14-15, the world’s fastest sail racing boats will compete on the Solent, where sailing’s elusive 50-knot speed barrier was eclipsed in the inaugural season. Cowes SailGP – the fourth stop of SailGP Season 2 – will take place during Cowes Week, and tickets will go on sale in March 2020.

The Great Britain SailGP Team will want to impress the home crowd in Cowes and win its first SailGP event title, as the team looks to fend off rivals from Australia, China, France, Japan and the United States, plus the possibility of an additional team during Season 2.

“Our apprenticeship is over now that Season 1 is finished, it’s time to deliver and bring it home for the British fans,” said CEO Chris Draper. “The turnout last year was unbelievable and something we hadn’t experienced in the sport before, so we can’t wait to unleash the F50s on our home waters and showcase speeds and technology not often associated with the sport.”

Last year’s SailGP European debut delivered some of the most thrilling action of the inaugural season. Taking place a stone’s throw away from the shore, Tom Slingsby’s Australia SailGP Team made history by breaking the 50-knot speed barrier in the first race en route to winning the Cowes SailGP title.

Strong winds contributed to heartbreak for the British team, which had to retire from racing after sustaining damage during a dramatic nosedive. There was also excitement for Rome Kirby’s U.S. team, which capsized during the first race but was able to recover and continue racing.

More than 24,000 spectators turned out to witness the action off Egypt Point in Season 1, at an event that delivered US$24 million in economic impact to the community, while reaching a total global audience of 231 million. For Season 2, SailGP is working closely with local partners Isle of Wight Council, Cowes Week Limited and ABP Southampton to deliver an incredible show in August 2020 that will include a ticketed spectator area at Egypt Point, as well as expanded hospitality opportunities.

“Cowes had some of the most exciting action of Season 1 and we can’t wait to see what’s in-store for next season’s event,” said SailGP CEO Russell Coutts. “Cowes is renowned as an iconic sailing venue but also the south coast is a big tourist destination in the summer, and we look forward to welcoming both existing and new fans to witness SailGP.”

The F50 catamaran is the fastest and most technologically advanced sail race boat in the world, recently honored as World Sailing’s Boat of the Year. It is capable of flying above the water at nearly four times the speed of wind, only powered by nature and the world-class athletes who pilot the boats.

Cowes will be the fourth event in SailGP Season 2, which debuts in Sydney, February 28-29, before heading to the U.S. for events in San Francisco in May and New York in June. The remainder of the Season 2 schedule will be announced in the coming months.

Tickets for Sydney SailGP are on sale now at SailGP.com/Sydney.