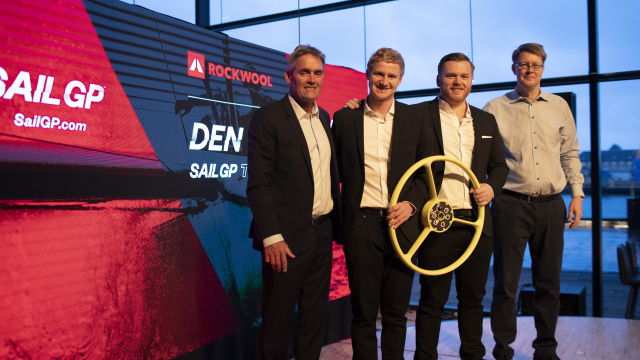 SailGP today announced the addition of the Denmark SailGP Team presented by ROCKWOOL ahead of the global championship’s second season. ROCKWOOL will serve as the team’s main partner, with multi-time around-the-world sailor Nicolai Sehested at the helm and Olympic silver medalist Jonas Høgh-Christensen as team manager. The Danes join six other national teams competing in the fastest sail racing in some of the world’s most iconic cities. 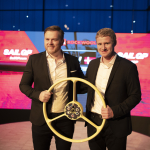 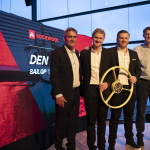 COPENHAGEN, Denmark – December 11, 2019 – SailGP today announced the addition of the Denmark SailGP Team presented by ROCKWOOL ahead of the global championship’s second season. ROCKWOOL will serve as the team’s main partner, with multi-time around-the-world sailor Nicolai Sehested at the helm and Olympic silver medalist Jonas Høgh-Christensen as team manager. The Danes join six other national teams competing in the fastest sail racing in some of the world’s most iconic cities.

ROCKWOOL has agreed to a three-year partnership with SailGP, with option to extend for a further three seasons. With ROCKWOOL’s support, the Danish team will compete in the global league that kicks off in Sydney in February 2020, and continues to destinations in the United States, UK and other venues to be announced.

SailGP CEO Sir Russell Coutts said: “The addition of the Danish team adds a lot of excitement heading into SailGP Season 2, which is shaping up to be another super competitive sporting championship. Denmark has achieved remarkable success in Olympic sailing and will now compete at the top level against the best sailors from six other nations in incredibly high tech, foiling, wingsailed catamarans. In addition, it’s fantastic to welcome ROCKWOOL as the main partner of the Denmark SailGP Team. This is probably one of the most exciting developments in Danish sailing for many years as it provides a new pathway for top young sailors who aspire to race professionally for their country.”

ROCKWOOL Group CEO Jens Birgersson said: “Sustainability is at the very heart of our business, with our products used to insulate buildings, save energy and ultimately contribute toward global climate goals. Sailing is a sustainable sport and perfect fit for the ROCKWOOL brand. As a Danish company operating internationally since our earliest years, we’re proud to bring a Danish team to the world stage for the very first time, and are very excited to see them race in Sydney next February.”

Sehested, 30, has had significant success across a variety of major sailing events, highlighted by two Ocean Race campaigns as a helmsman. He’s also been the skipper and founder of Ewii Racing (formerly TREFOR Racing) in the World Match Racing Tour since 2010, with more than 30 podium finishes.

Høgh-Christensen is a four-time Olympian in the singlehanded Finn class (2004-16) – including in 2012, when he took the silver medal – and a five-time world championship medalist. On the business side, he spent seven years in marketing, commercial and operations with entertainment company Live Nation, and co-founded peer-to-peer boat rental platform Boatflex.

The seventh supercharged F50 catamaran – World Sailing’s 2019 Boat of the Year – was launched last week in New Zealand with a test team from around the league. Once the new F50 is commissioned, Sehested will take the reins for a two-week training period in January – during which the remainder of the team will be determined – in the lead-up to the Season 2 opener of SailGP on February 28-29 in Sydney.

“The moment I saw SailGP, I knew we had to be part of this thrilling new chapter in our sport’s history,” said Sehested. “It’s the best sailors in the fastest boats, all racing close to shore – it’s incredibly intense racing and a true spectacle to watch. We’re extremely grateful to have such significant support from ROCKWOOL to be able to launch this team, and we look forward to making Denmark proud.”

Following the Sydney event, the global championship returns to the U.S. for events in San Francisco (May 2-3) and New York (June 12-13), before returning to Cowes on the Isle of Wight (August 14-15) for the first European event of the season. The remainder of the schedule will be announced by the end of January.

ABOUT THE ROCKWOOL GROUP
At ROCKWOOL Group, we are committed to enriching the lives of everyone who experiences our product solutions. Our expertise is perfectly suited to tackle many of today’s biggest sustainability and development challenges, from energy consumption and noise pollution to fire resilience, water scarcity and flooding. Our product range reflects the diversity of the world’s needs, while supporting our stakeholders in reducing their own carbon footprint.

Stone wool is a versatile material and forms the basis of all our businesses. With more than 11,600 passionate colleagues in 39 countries, we are the world leader in stone wool solutions, from building insulation to acoustic ceilings, external cladding systems to horticultural solutions, engineered fibres for industrial use to insulation for the process industry and marine & offshore.