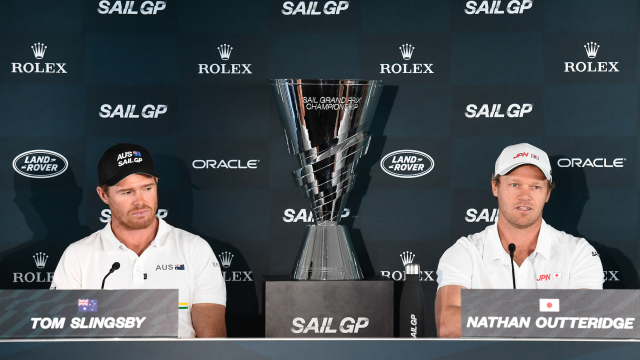 The city of Marseille got a glimpse of the world’s fastest sail racing boats today when the six high performance F50s took to the racecourse for the first time in practice. The inaugural season culminates this weekend when one team will earn the right to get its name engraved on the SailGP Championship trophy for the first time, as well as earn the sport’s largest prize purse – US$1 million. 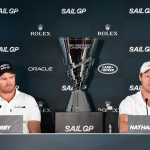 MARSEILLE, France – September 19, 2019 – The city of Marseille got a glimpse of the world’s fastest sail racing boats today when the six high performance F50s took to the racecourse for the first time in practice. The inaugural season culminates this weekend when one team will earn the right to get its name engraved on the SailGP Championship trophy for the first time, as well as earn the sport’s largest prize purse – US$1 million.

Today was the final chance for the teams representing France, Australia, China, Great Britain, Japan and United States to hone their skills ahead of the first day of racing tomorrow at 2.30 p.m. (local). Among them was Billy Besson’s France SailGP Team, which couldn’t wait to fly its colors on home soil in front of the spectacular historic Old Port.

“We started the season in Sydney in February and I can’t believe we are now at the end, at the Grand Final in Marseille,” said Besson. “Marseille is a magical setting and we’re really looking forward to fighting it out and giving a great show to the French fans.”

After four events, it is Australia’s golden boy Tom Slingsby who tops the season leaderboard. However, with three days of racing in Marseille, from September 20-22, the story is far from written. Close friend and on-water rival Nathan Outteridge is fighting hard to upset the Aussies party and make sure it is Japan winning the trophy on Sunday.

“We are good mates, and regardless of the result, we will be good mates, but I know what he’s like and I know what I am like and we are racing for more than bragging rights this weekend. We will be doing everything we can to put Tom off his game,” said Outteridge.

SailGP Season 1 will come down to a final match race between the top two ranked teams and Slingsby has left no stone unturned, arriving in France fresh from match race training in Australia.

“We have done everything we can to prepare. There are no other boats like this in the world so it is hard to train outside of the events, but we had a training camp in Sydney – got the team back together and worked on our communication. We’re ready to go,” said Slingsby.

“We knew we could be 100 points ahead of second place, but then it comes down to a quick match race and if you lose that race, you lose it all.  We have won three of the four events and its nice having that confidence.”

The podium is far from decided and while it might be Australia and Japan fighting at the top of the leaderboard, any of the other four teams could also be joining them on the podium. With just eight points between third and sixth, there will be intense racing from the teams to finish the first season on a high.

Only three points separate the United States SailGP Team from the Great Britain SailGP Team ahead of Friday’s competition and both teams are hungry for the final podium spot.

“We are looking for the podium and trying to overhaul the Americans,” said Fletcher. “It’s close with the other two boats and fingers crossed we get fantastic racing and cross the finish line ahead of them.”

Racing will take place over three days in the Rade Nord, just off the Seawall. The J4 Esplanade, opposite the MuCEM will host the SailGP Fan Zone featuring SailGP Inspire activities, the SailGP Fan Shop, the France SailGP Team F50 (after racing), broadcasts of the racing and commentary.

As racing is not visible from the SailGP Fan Zone, the best place to experience the triumphs and defeats on the racecourse is the SailGP Seawall, just meters away from the finish line. Limited tickets are still available across the three Seawall ticket options – Standard, Grandstand and Gold. All the Seawall ticket options include a complimentary shuttle to the seawall departing from the fan zone docks behind the MuCEM. Fans can also head out onto the racecourse on one of the two ticketed on-water experiences, in partnership with lcard Maritime.

Racing will be shown live in France on Canal+ Multisport. For fans around the world, global broadcast details can be found here. The complementary SailGP APP is available in the Apple and Google Play stores.