High drama on the Hudson 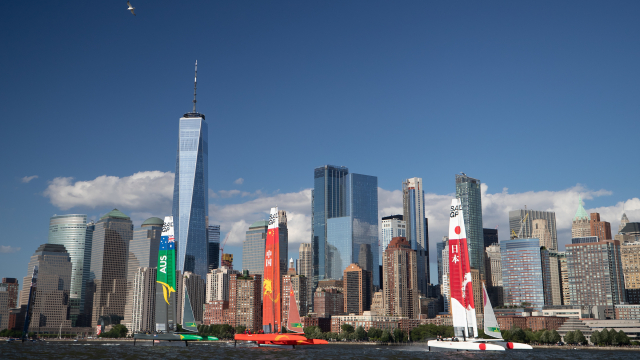 It was a day of high drama on the Hudson for the first day of the New York SailGP, which saw the world’s fastest sail racing boats hitting high speeds in front of crowds lining the waterfront at Brookfield Place in Battery Park City. 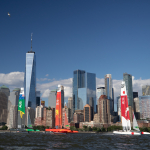 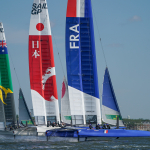 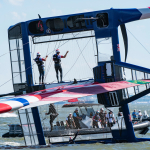 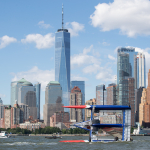 NEW YORK – June 21, 2019 – It was a day of high drama on the Hudson for the first day of the New York SailGP, which saw the world’s fastest sail racing boats hitting high speeds in front of crowds lining the waterfront at Brookfield Place in Battery Park City.

The spectacle started before the starting gun was fired, after a strong gust of wind saw the Great Britain SailGP Team capsize in dramatic fashion 30 minutes before the first race. All sailors were safe, with no injuries, but damage to the wingsail caused them to be unable to compete on day one. It was the first capsize in SailGP history, and the shore crews will work through the night to repair damage and try to get the team back in flying condition for tomorrow’s racing.

“All was going to plan with pre-start preparations, then we got hit by a massive gust of wind, the boat did a porpoise jump, and we were over,” said Dylan Fletcher, helmsman of the Great Britain SailGP Team. “It was devastating watching the other guys race around in the sun with that backdrop; we had been looking to show some of our performance and hopefully sneak a race win.”

It was also a tough start to the day for the hometown heroes, as wing trimmer Riley Gibbs was replaced due to injury on the United States SailGP Team with shore team manager Jeff Causey. Though an accomplished sailor in his own right, the last-minute call-up marked the first time Causey stepped into the role on the U.S. F50.

Once the start got underway, it was the teams from Australia and Japan that managed to cope best in the challenging conditions. Nathan Outteridge, helmsman of the Japan team, took two of three race wins on day one. The team’s excellent boat handling allowed it to navigate the constantly changing breeze and challenging racecourse.

“We tried to manage the differences between the gusts and lulls,” said Outteridge. “Downwind you can be speeding along at 40 knots but ahead of you there’s a massive hole, so you had to be looking ahead. What was so good for us today was our whole team knew what the game plan was – to expect anything and the team responded well.”

Outteridge was challenged in the first race of the day by longtime friend and rival Tom Slingsby, helmsman of the Australia SailGP Team, who took the win to continue his winning streak.

“It was crazy out there. I don’t think I’ve sailed in conditions like that before so there was a lot of safety involved just trying to get around the track,” said Slingsby. “We had a good day today – first, second, second – we’re happy with that, and we’re in the hunt tomorrow.”

Coming off a severe crash in San Francisco, the China SailGP Team proved it is back with a vengeance. There was no sign of confidence shaken on the Hudson River racecourse, even after coming off the foils during race two. Helmsman Phil Robertson is a renowned match racer known for pushing the limits, and today, it paid off for him.

Similar conditions are expected for tomorrow’s racing, and teams will be heading back to their respective bases to analyze what went right and what didn’t work.

New Yorkers can expect even more action during Saturday’s racing, which will feature two fleet races and a final match race, pitting the two highest scoring teams against each other in a nation-versus-nation battle to see who is crowned the overall winner of New York SailGP.

Limited tickets are available for on-water experiences that put fans in the heart of the action on the Hudson River. Locals can visit the Race Village at Brookfield Place in Battery Park City or fans globally can tune in to the action on the SailGP APP or watch via their local broadcast outlet. Racing will begin at 5 p.m. ET.