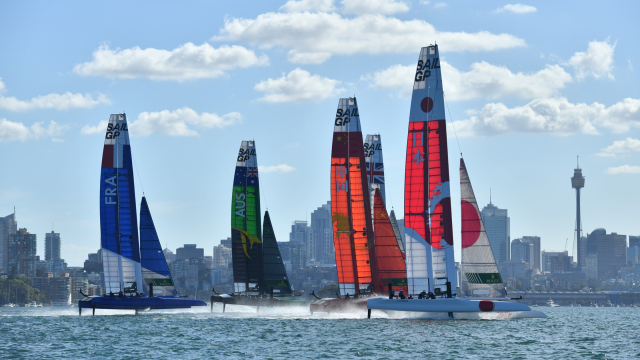 Race one of SailGP gets underway, overlooking the Sydney skyline

Sydney Harbour provided a spectacular backdrop for the historic global launch of SailGP.  In front of thousands of spectators, pre-favorite Japan SailGP Team capitalized on slick crew work and prior big foiling catamaran experience on day one of the world premiere of SailGP. 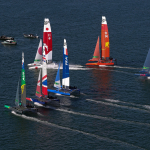 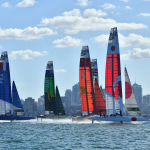 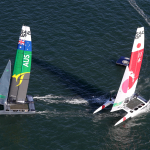 Tight at the top… 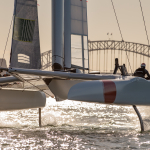 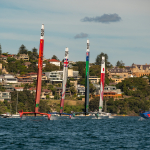 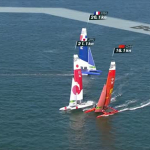 SYDNEY – February 15, 2019 – Sydney Harbour provided a spectacular backdrop for the historic global launch of SailGP.  In front of thousands of spectators, pre-favorite Japan SailGP Team capitalized on slick crew work and prior big foiling catamaran experience on day one of the world premiere of SailGP.

The Japanese team, helmed by Nathan Outteridge, posted a huge victory in race one. They followed it up with two second-place finishes, a performance that has them leading the hometown favourites by one point midway through the championship’s opening event.

With adrenaline coursing through the veins and cool heads, Slingsby’s Australian team rallied for two commanding comeback wins, in races two and three. Their surprise fourth in the opening race pulled the local team in behind the overall leader Japan when the day’s points were counted.

“Our team did really well,” said Outteridge. “That was the first time we’ve ever done a race together as a group. We made some errors but obviously we made less errors than everyone else. For the first day of SailGP and the first day for our team I couldn’t ask for more.

“It was an incredible day. The breeze came in at the perfect moment and it was fantastic to see so many people out watching. There were some really good battles on the water; we loved every moment of it.”

Slingsby attributed Australia’s race one result to poor boat handling on the revolutionary F50, and failing to pick the right side of the course in tricky easterlies, between 6 and 10 knots. Although he did hit the top speed of the day, reaching 34 knots in under 10 knots of breeze.

“It wasn’t the start we wanted,” Slingsby admitted. “We had a list of things to go through after that and we got better starts and got away from the pack. When we sailed by ourselves it was pretty obvious to see we are fast. We just have to get out of the pack and get free.

“But that was an unbelievable a day. The atmosphere was incredible. At the end of the race we sailed over to the spectator fleet and there were thousands of people everywhere. There were Australian flags and people chanting, it was incredible.”

The rivalry between the six national teams was strong but at the top of the fleet the fight between the Australian and Japanese team is heating up.

“It’s out of Nathan’s hands; if we perform we’ll beat him,” said Slingsby, who finished the day on 27 points to Japan’s 28s.

Outteridge shot back with, “The Australians are easily beatable – they beat us today because we made mistakes.”

Day one of the two-day championship drew overwhelming support from thousands of people on spectator vessels, those enjoying the front row fan seats on Shark Island and a global broadcast audience.

The British team skippered by Dylan Fletcher, started strong in all three races, finishing the day third overall on the leaderboard.

Racing continues on Saturday, February 16 before the championship moves to Event 2, in San Francisco.