Countdown commences: One month until SailGP’s European debut in Cowes 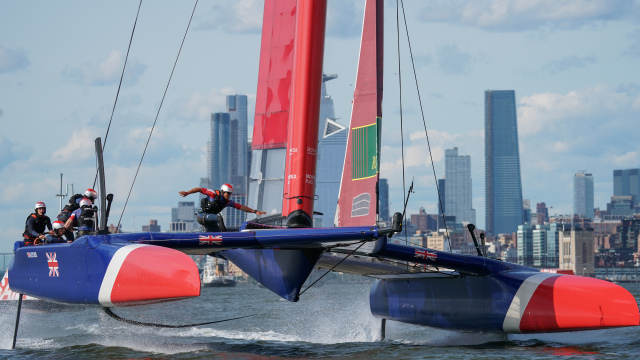 One month until the Cowes SailGP Team race on home waters

SailGP, the fastest sail racing in the world, flies into the UK to make its debut on European waters in just one month. On August 10 and 11, SailGP will serve as the opening feature of the iconic Cowes Week regatta on the Isle of Wight. Teams made up of some of the finest athletes from Great Britain, Australia, China, France, Japan and the United States will compete in the penultimate event of the inaugural 2019 season. 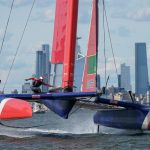 LONDON – July 10, 2019 – SailGP, the fastest sail racing in the world, flies into the UK to make its debut on European waters in just one month. On August 10 and 11, SailGP will serve as the opening feature of the iconic Cowes Week regatta on the Isle of Wight. Teams made up of some of the finest athletes from Great Britain, Australia, China, France, Japan and the United States will compete in the penultimate event of the inaugural 2019 season.

Established at the end of last year by Sir Russell Coutts and Oracle Co-Founder Larry Ellison, SailGP is an intense, season long battle between rival teams in identical, high tech flying boats, not only competing to hit sailing’s elusive 50-knot speed barrier, but also for a $1 million end of season prize.

With the competition still wide open and two events remaining, Cowes SailGP is an important milestone for the competing countries. Not least for the Great Britain SailGP Team, helmed by Olympian Dylan Fletcher, who will be looking for redemption after capsizing in New York last month. For the British, it will be the first time sailing in front of a home crowd and they will no doubt be seeking a race victory.

The new global league, designed as the ultimate spectator experience, places fans closer to the action than ever before. With just one month to go, a variety of tickets for Cowes SailGP can still be purchased, both in the onshore grandstand in the heart of the Cowes SailGP Race Village and on-water, on the race course perimetre.

“We are very excited to bring SailGP to the UK for the first time. Cowes is considered the home of UK sailing so where better to showcase the speed, technology and athleticism involved in SailGP,” said Coutts, the CEO of SailGP. “There are a number of teams capable of winning races and events – and the pressure will be on for the Great Britain team. Many of the Brits are based on the South Coast, and I know how hungry they are for victory in front of a home crowd.”

With the first three events of the inaugural season completed in Sydney, San Francisco and New York, SailGP will now embark on the European leg with Cowes SailGP, before the Grand Final in Marseille in September. The two European destinations will delight spectators and provide those who are yet to see a live race with the chance to watch the fastest sail racing in the world, as F50 catamarans fly at record-breaking speeds just metres from the shore.

“Cowes SailGP is going to be epic,” said Fletcher. “To race for our country in front of a home crowd – what more could we ask for? Except to top the podium – that is what we really want and we will be fighting hard for every place on the racecourse to get it.”

The Cowes SailGP Race Village will run along the seafront from the end of the Cowes Green up to Egypt Point, and will be free for the public to enjoy. With the races taking place just off Egypt Point from 3-4:30 p.m. each day, activity will begin in the Race Village at 11:30 a.m. and will provide an unbeatable focal point for watching the action with big screens, live commentary, exhibits and much more.

On Friday, August 9, fans can access the Race Village from 10 a.m. to watch the inaugural King’s Cup – a major sailing event hosted by the Duke and Duchess of Cambridge in support of their charitable causes.

The F50s will take to the Solent in the afternoon for the official SailGP practise racing from 3-4:30pm.

Fans have two ticketed options to get a ring-side seat to the action. Situated in the heart of the Race Village, the grandstand gives fans unrivalled views of the racecourse.

For those looking to enjoy the action afloat, the Cowes SailGP Cruise Premier provides spectators with a premium on-water experience, in the heart of the thrilling racing. More information on ticketing options is available here.

For exclusive updates on Cowes SailGP and all of the unique experiences available for event days, as well as other race details, fans can register at SailGP.com/Cowes. SailGP also offers a complimentary boater registration programme for fans wishing to watch the action from the comfort of their own boat in spectator zones on the racecourse perimetre. Registrants will receive important race management information, schedules and the latest race maps, as well as a commemorative Cowes SailGP boat flag.