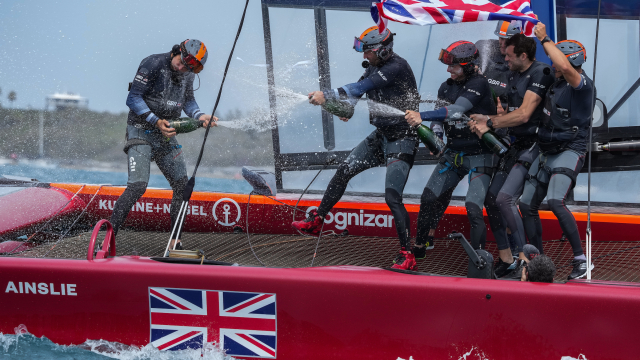 Ben Ainslie’s Great Britain SailGP Team was crowned winners of the opening event of SailGP Season 2. In a dramatic day that saw overtakes, crashes and a capsize, the Bermuda Sail Grand Prix presented by Hamilton Princess was decided in a winner-takes-all final podium race that saw Ainslie come out on top from Tom Slingsby’s Australia team and Billy Besson of France. 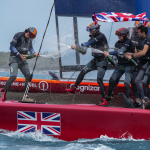 BERMUDA - April 25, 2021 - Ben Ainslie’s Great Britain SailGP Team was crowned winners of the opening event of SailGP Season 2. In a dramatic day that saw overtakes, crashes and a capsize, the Bermuda Sail Grand Prix presented by Hamilton Princess was decided in a winner-takes-all final podium race that saw Ainslie come out on top from Tom Slingsby’s Australia team and Billy Besson of France.

Up until that point, reigning champions Australia had been the dominant team, winning four of the five races and entered the final race as strong favorites. However, it was Ainslie that again caused the upset and put in the perfect performance when it mattered. With his team of Luke Parkinson, Iain Jensen, Matt Gotrel, Neil Hunter and Richard Mason, he sailed past the Aussies in the final podium race to win by just four seconds and, with it, the first event of the season, claiming his place at the top of the leaderboard.

Ainslie said: “It was a cracking race. It was awesome. It’s what we want to do it for; go against the top sailors in the world in conditions like this - it was perfect. It was a huge credit to the team, we really struggled yesterday, but we analyzed what went wrong and today was a much better day and I am delighted with the result, it’s a great way to start the season.

Slingsby said: “It was a great race. We feel a little hard done by, as we sailed so well all week. But those are the rules – you’ve got to win that last race, and we were close but not quite there.”

Great Britain and Australia were joined by France in the final race, with Besson’s team – with the addition of Great Britain’s Leigh McMillan onboard – securing its first ever podium finish in SailGP.

Elsewhere, there were plenty of dramatic moments with the F50’s sporting the smaller 18-meter wing for the first time in the building breeze.  Newcomer to the fleet Jimmy Spithill, at the helm of the U.S. team, had a nerve-wracking collision with Nathan Outteridge’s Japan team in the first race of the day – that took both boats out for the remainder of the racing and also saw Spithill’s F50 on its side on the Great Sound shortly after the collision. There was also a triple penalty for Phil Robertson’s Spanish team after a risky maneuver at the start of race five that perhaps cost the team its place in the final podium race, missing out by just one point.

America’s Cup winners and Olympic champions Peter Burling and Blair Tuke had a better day on their SailGP debut for New Zealand. Moving up from the bottom of the leaderboard after day one, to finish a respectable fifth place, just behind the Spanish team. Nicolai Sehested’s Denmark SailGP Team presented by ROCKWOOL took sixth place. Japan and the United States sit at the bottom of the leaderboard after the day’s drama.

SailGP CEO Sir Russell Coutts said: “Quite simply that was the best racing I think I have ever seen on television for a sailing event. What a day, there was drama, fantastic quality of racing, lots of lead changes – it just had everything. Unfortunately it had a crash but you are going to get that in high level racing every now and then but it was really exciting stuff.

“I think it just showed again what a fabulous venue Bermuda is to run international sailing competitions and for a SailGP event, it is absolutely perfect. We missed the crowds due to the current pandemic but everyone saw what the racing was like and what a stunning backdrop Bermuda is and that’s the main thing. I couldn’t be more thrilled with Bermuda and we certainly want to come back for many years to come.”