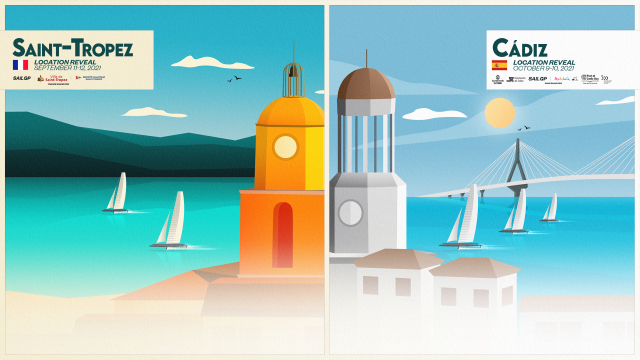 SailGP today announced two new venues that will be added to the European leg of the global championship’s second season in 2021. In two firsts for the league, SailGP will visit Saint-Tropez on the French Riviera on September 11-12, ahead of the first-ever Spain Grand Prix | Andalusia in Cádiz on October 9-10. The two new venues form part of an expanded season that is planned to feature nine events, with seven having now been announced. 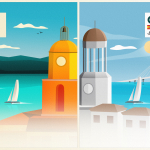 LONDON - December 18, 2020 - SailGP today announced two new venues that will be added to the European leg of the global championship’s second season in 2021. In two firsts for the league, SailGP will visit Saint-Tropez on the French Riviera on September 11-12, ahead of the first-ever Spain Grand Prix | Andalusia in Cádiz on October 9-10. The two new venues form part of an expanded season that is planned to feature nine events, with seven having now been announced.

With a long tradition of hosting prestigious sailing events, Saint-Tropez will provide a spectacular venue in France and a warm welcome for both the global league and the home team, hosted in coordination with the Société Nautique de Saint-Tropez.

With the announcement of the Andalusian port city of Cádiz as the host of the Spain Grand Prix for the next two seasons, the league added its second new country for Season 2 following a competitive bid process that included five Spanish cities.

SailGP CEO Sir Russell Coutts said: “The announcement of two new cities and the competitive bid process we hosted in Spain really shows that cities are recognizing the economic benefits and global audience that SailGP brings. With the Andalusian port of Cádiz and the backdrop of the French Riviera, I have no doubt that both venues will provide spectacular locations to host SailGP’s thrilling, close-to-shore racing. With seven venues now announced, an expanded season of nine events and eight highly competitive teams, we are confident that SailGP Season 2 will be a fiercely contested, world-class championship.”

As previously announced, the Bermuda Grand Prix presented by Hamilton Princess will set the stage for Season 2 on April 24-25, before the league shifts to Europe for the first of five events, starting with the Italy Grand Prix held June 5-6 in Taranto, the other new country added to the line-up in Season 2. From there, the eight national teams will compete at the Great Britain Grand Prix | Plymouth on July 17-18, followed by the ROCKWOOL Denmark Grand Prix | Aarhus on August 20-21. The league has also announced that the United States Grand Prix in San Francisco will serve as the SailGP Season 2 Grand Final in April 2022.

SailGP Season 2 will be showcased around the world via partnerships with top-tier broadcasters in more than 100 territories, including exclusively in France on Canal+ and Spain via TVE and TV3. Other international broadcast partners include: SKY Sports (U.K./Ireland), CBS Sports (U.S), Fox Sports (Australia), TV 2 Sport (Denmark) and DAZN (Japan).

Saint-Tropez
The Société Nautique de Saint-Tropez – one of the oldest nautical sports societies dating back to 1862 – will serve as Technical Partner of the France Grand Prix, taking place in the beautiful Southern French town of Saint-Tropez.

The Societe Nautique de Saint-Tropez organizes some of the most prestigious sailing events in the world – including the Voiles de Saint-Tropez – and can now add SailGP to its exclusive list.

One of the most famous resorts in Europe, the stunning Gulf of Saint-Tropez will be the site of the high-speed racing, in front of the walls of the city and its famous, world renowned yellow and pink bell tower.

Saint-Tropez Mayor Sylvie Siri said: “It is a great pride for the City of Saint-Tropez to host the SailGP global championship in 2021, one of the most media-friendly and spectacular sports competitions in the world.

“This event, which will take place 15 days before the ‘Voiles de Saint-Tropez’, will further strengthen our reputation as a harbor for major sailing events. And, it is also a good prospect for our local businesses, who will be able to benefit, aside from the high season, from a major event that will attract a large global audience.”

Cádiz
Cadiz in southwest Spain will host the first-ever Spain Grand Prix and will be the sixth stop of SailGP Season 2.

With support from the Andalusia Tourist Office, the local government of the Province of Cádiz, the city council of Cádiz and port authority of the Bay of Cádiz, the event will be integrated into the very heart of the city.

The event will take place over the weekend of October 9-10 and coincide with National Spanish Day on October 12, ensuring a weekend of celebrations for the city. The Spain Grand Prix will also form part of the commemorative events calendar marking the first circumnavigation of the globe – an expedition that departed Andalusia in 1519 and arrived back in Seville in 1522.

Juan Marín, vice president and head of tourism of the government of Andalusia said: “SailGP is currently one of the leading sports events in the world, therefore hosting the Spain Grand Prix in Andalusia is something we feel very proud of. This event is part of our strategy to relaunch both tourism and the economy in our region after a very difficult 2020. With the addition of our partnership with the Spain SailGP Team, we will also be able to further enhance the Andalusia brand around the world.

“Andalusia has been awarded the European Sports Region of 2021 and we will be celebrating the first circumnavigation of the globe until 2022. SailGP will be very much a part of the festivities and we are looking forward to an amazing event.”

In its inaugural season, SailGP attracted a global broadcast audience exceeding 256 million and an average economic impact of US$23 million per venue.

The remainder of the Season 2 calendar will be announced January 2021.

ABOUT SAILGP // SailGP is racing redefined, powered by nature and driven by purpose. Established in 2018 and headquartered in London and New York, SailGP is an annual, global sports championship featuring bold, cutting-edge technology and awe-inspiring athleticism. The fan-centric, inshore racing takes place in some of the most iconic harbors around the globe and offers the sport’s largest monetary prize of $1 million. Rival national teams battle it out in identical supercharged F50 catamarans, engineered for intense racing at electrifying speeds exceeding 50 knots (nearly 60 mph/100 kph). Visit SailGP.com for more information.