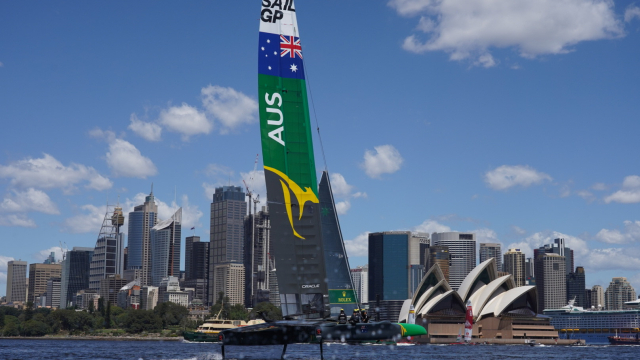 The Australia SailGP hits the waters of Sydney Harbour for the first time ahead the SailGP Season 2.

Aussie team kicks off training ahead of Season 2 opener, February 28-29

SailGP champion Australia – led by Olympic hero Tom Slingsby – launched its 2,400kg supercharged F50 into Sydney Harbour for the team’s first official training session on Wednesday, kicking off a grueling training schedule as the team prepares to defend its title when the global racing championship returns next week. 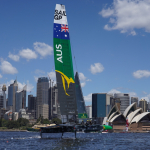 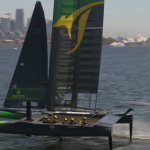 SYDNEY - February 19, 2020 - SailGP champion Australia – led by Olympic hero Tom Slingsby – launched its 2,400kg supercharged F50 into Sydney Harbour for the team’s first official training session on Wednesday, kicking off a grueling training schedule as the team prepares to defend its title when the global racing championship returns next week.

Following a heart-pumping inaugural season – which saw Slingsby helm the Australia SailGP Team to victory over five rival nations to take home the trophy and historic US$1 million championship prize – the Australia team returns to defend its title in front of a home crowd at Sydney SailGP on February 28-29.

Emblazoned with a giant kangaroo, Australia flag, and green and gold paint, the Australia SailGP Team’s wingsailed catamaran is the fastest and most technologically advanced class of sail race boat in the world. The F50 made history last season by breaking the sport’s elusive 50-knot barrier, reaching speeds of nearly 100 kph powered only by nature.

However, Australia is set to face tougher competition than ever this year, with new teams from Denmark and Spain joining the championship, alongside a new look Great Britain team, led by the world’s most successful Olympic sailor, Sir Ben Ainslie. The new additions take the total number of teams to seven with France, Japan and the United States all returning for the league’s highly anticipated second season.

Slingsby said: “We’re really excited to be back in Sydney Harbour, competing and defending the title in front of our home crowd. Last year was huge for us, winning Sydney SailGP and the US$1 million championship in Marseille, so there’s definitely pressure on us to come out strong and, ultimately, retain the title this season.

“We’re just pumped to be back on the water as a team and training this week – with Denmark and Spain joining the league, Ben Ainslie expected to be a huge threat leading the Great Britain team and Nathan Outteridge from Japan trying to get one back on us this season, the competition is going to be strong.

“We have amazing fans and we can’t wait to see them out on Sydney Harbour like last year – there’s some awesome on-water and Shark Island tickets, so spectators can get right up close to the action.”

New teams Denmark and Spain also hit Sydney Harbour this week, showing off their F50s’ striking livery for the first time. Spain’s wingsail features the iconic ‘Sun of Miro,’ painted by Catalan artist Joan Miró and now a symbol of Spanish tourism, while the famous Danish knight Holger Danske – known as Ogier The Dane – looks down from the 24-meter wingsail of the Danish boat. According to Danish folklore, he sits waiting in the dark cellar of Kronborg Castle (Denmark) – and, when called upon, will return to lead his country into battle. The eye-catching graphics will add to the color and spectacle of Sydney SailGP when it kicks off next week.

Final release tickets are available for both on-water and Island Arena options, starting at AU$87 for children and $125 for adults, at SailGP.com/Sydney.