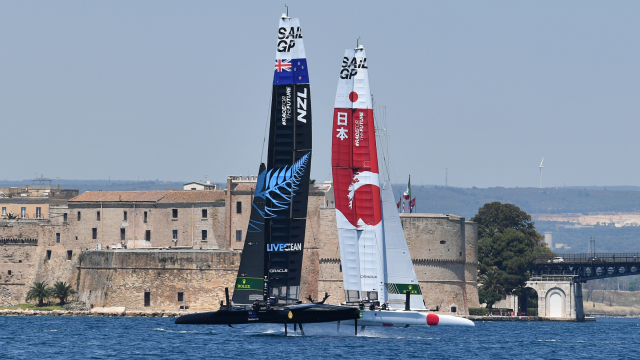 The sport’s best athletes return to the racecourse this weekend when the first-ever Italy Sail Grand Prix gets underway in the Southern Italian city of Taranto. Following show-stopping action in Bermuda – which saw dramatic racing and an epic collision – SailGP returns for its second event of the season with some new faces and tighter rules to keep both the athletes and the boats safe. 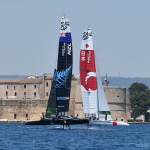 TARANTO - June 4, 2021 - The sport’s best athletes return to the racecourse this weekend when the first-ever Italy Sail Grand Prix gets underway in the Southern Italian city of Taranto. Following show-stopping action in Bermuda – which saw dramatic racing and an epic collision – SailGP returns for its second event of the season with some new faces and tighter rules to keep both the athletes and the boats safe.

Fans can relive the scenes from Bermuda with the new series of SailGP: Racing on the Edge – the league’s behind the scenes content series – that uncovers the stories behind SailGP and the athlete’s that make them. Season 2, Episode 1 kicks-off looking back at the incident between Jimmy Spithill and Nathan Outteridge, when the United States and Japan SailGP Teams crashed at the opening event of the season forcing both boats to retire from the event and resulted in an against-the-clock effort to get both boats to the startline in Taranto.

Outteridge said: “Since Bermuda we’ve done a lot of analysis of the incident and we had a couple of protest hearings and discussions with the umpires. We made the mistake, we were the give-way boat and we did not give way. We just have to not do that again and I have to put my hand up there, it was a mistake. Mistakes happen. These boats close speed very quickly. The good thing at the end of it is that no one got hurt, the boats are fixed and we can focus on racing here. But, we won’t stop pushing, if we are not pushing, we might as well go home.”

As a result of the collision, tougher rules are now in place – from Italy onwards – to avoid a collision and ultimately serious damage to the high-tech, identical F50 catamarans. The updated ruling gives more discretion to the umpires to award harsher penalties in the event of a collision which are given depending on the extent of damage. Both for the boat in the wrong, but also if the other boat didn't do enough to avoid the collision. This could also result in ramifications to the points in the overall SailGP Season Championship.

Spithill said: “In the sport of sailing this style of racing is unlike anything else. This is very, very fast and decisions happen very quickly so mistakes are going to happen. Putting that behind us, it will be nice to get through the weekend and complete every race. We only got to race on the first day in the last event and we’d love to get a strong result here.

“It’s great to be back here in Italy. I obviously have an association with Italy and just seeing a lot of the locals and a lot of the fans, there is huge engagement and I think we’ll see a huge spectator fleet both on and off the water this weekend.”

Also excited to be in Italy – at his home event – is Japan SailGP Team member Francesco Bruni. The eight-time world champion is looking forward to putting on a show for home fans, including nearly 900 boats that have registered their place on the water to capture the spectacular action.

Bruni said: “I am very excited and it’s a great pleasure to be here. These few days of training have shown to everybody what Taranto is all about and that it’s a perfect stadium for sailing. We have had beautiful conditions and I am sure there’s going to be some great, great racing. The fans are going to love it.”

Adding to the strongest line-up ever seen in the sport is Olympic champion Paul Goodison at the wheel of the Great Britain SailGP Team for the first time who will go head-to-head with Arnaud Psarofaghis, who makes his debut in the driving seat of the New Zealand F50. They will be joined by an on-form French team under the leadership of Billy Besson, the young Spanish team led by Phil Robertson and Florian Trittell, Tom Slingsby’s Australia team – that will be hungry for victory this weekend – and Nicolai Sehested’s Denmark SailGP Team presented by ROCKWOOL.

The Italy Sail Grand Prix will comprise two days of racing, with five fleet races followed by a podium race with the top three boats in the ultimate showdown to decide the winner on Sunday. As an added incentive, additional prize money will be awarded to the top three boats at each event in addition to the $1 million up for grabs at the Grand Final in San Francisco in March 2022.

Racing gets underway at 1.30 p.m. local and is live on Sky Italia and via Rai Sport as well as worldwide with broadcast coverage now reaching 175 territories. Fans around the world can find out how to watch via SailGP.com/Watch plus download the award winning, free SailGP APP for all the race data and view from the onboard cameras. Limited tickets are available via SailGP.com/Taranto.