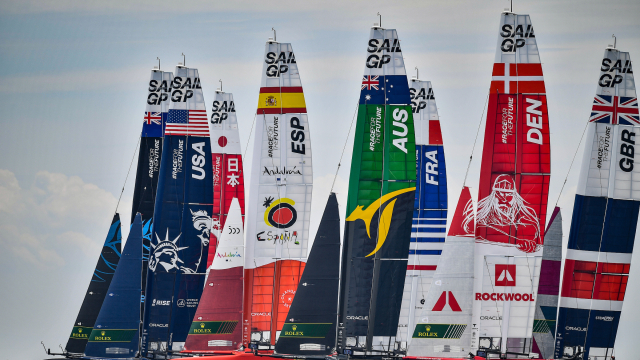 Hundreds of on-water spectators and a packed shoreline witnessed the return of Jimmy Spithill’s United States SailGP Team and Nathan Outteridge’s Japan SailGP Team as they dominated the opening day of the Italy Sail Grand Prix in the vibrant Southern Italy city of Taranto, finishing on even points at the top of the leaderboard. 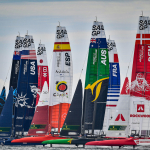 TARANTO - June 5, 2021 - Hundreds of on-water spectators and a packed shoreline witnessed the return of Jimmy Spithill’s United States SailGP Team and Nathan Outteridge’s Japan SailGP Team as they dominated the opening day of the Italy Sail Grand Prix in the vibrant Southern Italy city of Taranto, finishing on even points at the top of the leaderboard.

Due to lighter conditions on the Mar Grande, it was decided ahead of racing that each boat would feature just three crew onboard, while the course was also moved further away from shore to help achieve better winds.

Following a devastating Season 2 opener in Bermuda for both the U.S. and Japan teams, and despite the reduction in the number of crew onboard, both teams came out in full form for the first day of racing in Taranto. Spithill’s U.S. team won the first and third race – with Japan securing a single victory in the second race – ending the day with 21 points.

Spithill said: “When you are sailing three-up, you’ve got all the jobs of five crew members going essentially to two guys, as the driver doesn’t do a whole lot else. So full credit to CJ [Paul Campbell-James] and Rome [Kirby] today. We were just trying to stay clean and get away from the pack behind us. The main thing is we finished all three races and that’s a good feeling.”

Despite Outteridge’s team tying up the points, Spithill topped the leaderboard as the better placed team following its tactical performance in the final race of the day.

Outteridge said: “We made a few mistakes in the first race, but the second one was well sailed. It is really hard with three people onboard; there was a lot of multi-tasking onboard today and it was a great job by Chris [Draper] and Tim [Morishima] picking the wind and executing some maneuvers. I’m very happy with how the day has gone.”

Phil Robertson’s Spain SailGP Team rounded out the top three positions to show fans that it has every intention of making its mark as one of the newest teams in the league.

The day was not so successful for Tom Slingsby’s Australia team. The SailGP Season 1 Champions experienced hydraulic issues during the first race, causing a constant decline in performance which saw them come to a complete stop and unable to finish the race. A sixth and a last place to follow saw them end the day bottom of the leaderboard.

Elsewhere on the packed shoreline racecourse, there were mixed performances by the replacement drivers – Arnaud Psarofaghis in charge of the New Zealand boat and Paul Goodison at the wheel of the Great Britain SailGP Team. Psarofaghis, replacing Peter Burling due to his Olympic commitments, secured third, sixth and fifth placed finishes. Meanwhile, Goodison - who won the opening event of Season 2 under permanent driver Ben Ainslie - guided the Brits to sixth, fourth and seventh in the race rankings.

The Kiwis and Brits remain within touching distance of qualifying for Sunday’s three boat, winner-takes-all final in Taranto, as both teams sit tied on six points behind third place Spain at the end of play.

Racing gets underway on the concluding day of the Italy Sail Grand Prix in Taranto at 1.30 p.m. local and is live on Sky Italia and via Rai Sport. Fans around the world can find out how to watch via SailGP.com/Watch as well as download the award winning, free SailGP APP for all the race data and view from the onboard cameras. Limited tickets are available via SailGP.com/Taranto.