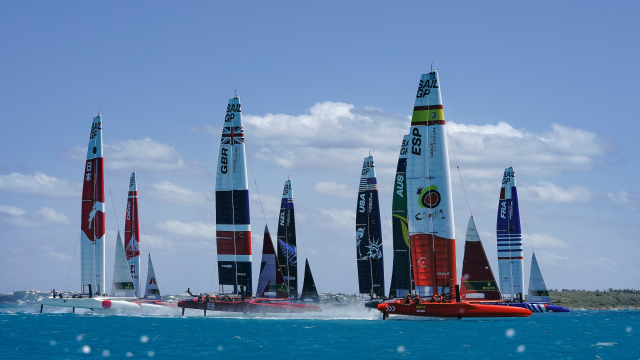 SailGP Season 2 kicks off in Bermuda

SailGP returns with the strongest line-up ever seen in the sport with world champions, Olympic medalists and America’s Cup winners battling it out in identical, foiling catamarans over eight global events for the ultimate bragging rights and the sport’s biggest monetary prize. 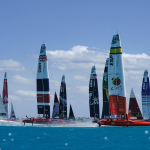 BERMUDA - April 23, 2021 - SailGP returns with the strongest line-up ever seen in the sport with world champions, Olympic medalists and America’s Cup winners battling it out in identical, foiling catamarans over eight global events for the ultimate bragging rights and the sport’s biggest monetary prize.

SailGP Season 2 kicks off this weekend with the Bermuda Sail Grand Prix presented by Hamilton Princess and will see a star-studded line up. Season 1 champion Tom Slingsby at the helm of the Australia SailGP Team will have to defend his title against Great Britain’s most successful Olympic sailor of all time Sir Ben Ainslie, America’s Cup winner Jimmy Spithill – at the helm of the new-look U.S team – and Peter Burling and Blair Tuke, who are making their debut for New Zealand in SailGP this season. Not to mention double Olympic medalist and Season 1 runner-up Nathan Outteridge piloting the Japan team.

Slingsby will also have to fend off teams from Spain, Denmark and France with equally impressive pedigree with Denmark’s ocean racer Nicolai Sehested, four time world champion Billy Besson of France and world match racing champion Phil Robertson at the helm of the Spanish F50.

Ainslie said: “This is an exceptional line up of talent and it’s quite possibly the best we’ve seen in sailing. Whoever comes out on top is going to really have to sail incredibly well. As competitive sailors, as competitive sportspeople, that’s what you want. You want to be racing against the best and really testing yourself and we’ve got that now with SailGP. It’s an incredible opportunity for all of the athletes in this league to go up against the best and to race in iconic venues, in these incredible F50 boats. It doesn’t get any better than that.”

Spithill agreed: “I’ve never ever seen a line-up of just the best in the world, from different backgrounds too, not just from one area but we really do have representation from all the different disciplines in the sport and the best of the best, so it’s going to provide us with some pretty compelling racing. I can’t wait.”

For Season 2, SailGP has increased its focus on gender equity and diversity starting with each of the teams being joined by at least one female athlete in Bermuda and throughout the season. The overarching aim is to fast-track the development of top female sailors into the league.

As well as new teams, new technology and new partners, SailGP will also enter the new season with a sense of purpose that goes beyond entertainment. The league and its eight national teams will Race for the Future, championing a world powered by nature with the goal of accelerating the transition to clean energy.

Anticipation has been building for some time, after racing in 2020 was suspended due to the global coronavirus pandemic. Not only does Season 2 bring fresh-look teams but also new technology with the modular wingsail being debuted in Bermuda enabling it to change from 18 meters to 24 meters depending on the wind strength. The new wingsails mean racing can take place in a broader range of conditions and by the third event of the season – the Great Britain Sail Grand Prix – the 29 meter wingsail will emerge and be the set-up for the revolutionary F50s racing in light air conditions.

The Bermuda Sail Grand Prix presented by Hamilton Princess marks the opening event of the second season for the sport’s pinnacle league and is the first of eight events that take place throughout 2021-2022 across three continents. Fans will be able to enjoy the action worldwide with broadcast coverage now reaching 175 territories.

Broadcasting of the event will feature the most immersive, multi-platform experience the sport has seen with new innovative and data-driven enhancements, significantly expanding on the exciting content being shared with its international audience. New features include improved LiveLine-Fx 3D boundaries and augmented graphics, explainers for those new to the sport and enhanced on-board audio and camera feeds. Real-time data analysis and team comparisons will be provided through SailGP Insights powered by Oracle. The broadcast will be coordinated through SailGP’s innovative and award-winning remote production hub in Ealing, London.

Each Sail Grand Prix includes two days of epic racing and culminates at the end of the weekend with a three-boat podium race to decide the winner. Points will be accumulated throughout the season, with the Grand Final taking place in San Francisco, where $1m will be up for grabs in a winner-takes-all final.

The Bermuda Sail Grand Prix presented by Hamilton Princess takes place this weekend. From there, the season crosses to Europe where racing will continue in Taranto, Italy (June 5-6), Plymouth, UK (July 17-18), Aarhus, Denmark (August 20-21), Saint-Tropez, France (September 11-12) and Cádiz - Andalusia, Spain (October 9-10). The league will then finish in 2022 with races in Christchurch, New Zealand and the Grand Final in San Francisco, U.S, on March 26-27.

For details on how to watch, visit SailGP.com/watch.

Media Hub // The SailGP Media Hub is a dedicated space for media to be able to cover SailGP events remotely and includes live streams and updates, press conferences participation and post-race athlete interviews. Access the SailGP Media Hub via mediahub.sailgp.com.