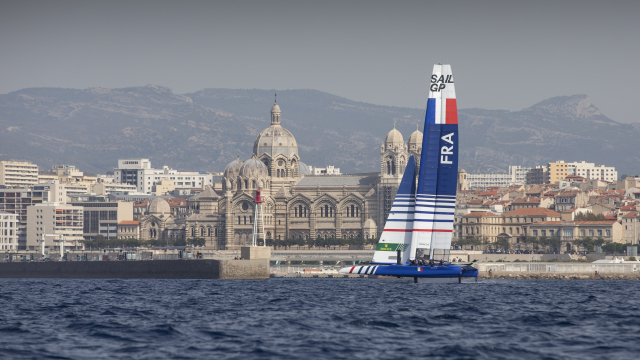 Billy Besson's French team is first to sail in Marseille

With five days until six national teams go head to head at the Marseille SailGP Season 1 Grand Final, the home team – headed by Frenchman Billy Besson – hit the water for the first time today in its supercharged F50 catamaran. For the first time ever in France, the world's fastest flying catamarans and top athletes will take center stage, promising high speed, high tech and high drama over the weekend of September 20-22. 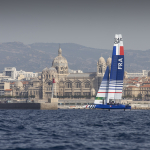 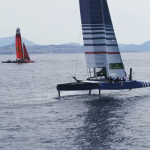 MARSEILLE, France – September 15, 2019 – With five days until six national teams go head to head at the Marseille SailGP Season 1 Grand Final, the home team – headed by Frenchman Billy Besson – hit the water for the first time today in its supercharged F50 catamaran. For the first time ever in France, the world's fastest flying catamarans and top athletes will take center stage, promising high speed, high tech and high drama over the weekend of September 20-22.

The stakes are high and history will be written in the Mediterranean port of Marseille. Following events in Sydney, San Francisco, New York and Cowes (UK), the top two teams at the end of three days of racing will battle it out for the striking SailGP trophy – commissioned by world-renowned trophy maker Thomas Lyte – as well as US$1 million, an unprecedented amount of prize money in the sport of sailing.

For Besson’s France SailGP Team, it will be a battle for points with Phil Robertson’s China SailGP Team, its nearest rival on the leaderboard – as well as the chance to win the hearts of the home crowd, watching from special viewing platforms built on the Seawall.

“It’ll be like home here, in front of our own public, families and friends,” said Besson. “And I hope this additional pressure will be positive, like having an extra crew member onboard to support us all. We are increasingly confident on the boat and are beginning to find out how to tame the beast in a range of conditions and get her to do what we want. That’ll be the aim in Marseille, to get the F50 doing what we want and really show the home crowd what we’re made of.”

Fresh from recent success at Cowes SailGP last month, when the team recorded its best race result to date, Besson (helmsman, Sevrier), Marie Riou (flight controller, Plougastel-Daoulas), Matthieu Vandame (wing trimmer, Rennes), Olivier Herledant (grinder, Douarnenez), Timothé Lapauw (grinder, Antibes) and Devan Le Bihan (grinder, Hennebont) are eager to put on a show for the French fans. To celebrate being on home soil, the team unveiled a new design on the French F50 – the famous Breton stripes – emblazoned not only across the 24-meter wingsail, but also on the main platform of the boat.

Currently, Australia’s Tom Slingsby is leading the charge at the top of the leaderboard but will have to fight off strong competition from fellow Olympic gold medalist Nathan Outteridge of Japan, who is just four points behind. Rome Kirby’s young United States team and the British team helmed by Olympian Dylan Fletcher will also be fighting hard to finish the season on the podium.

“You can get some big waves if the Mistral is strong, with numerous local effects when the thermal breeze kicks in and the wind is affected by the city and the islands, so it makes for interesting conditions,” said Lapauw, the youngest member of the French team.

Racing will take place at 2.30 p.m., starting on Friday September 20, with the six F50s competing in front of the Seawall on the Rade Nord racecourse.

For French fans not able to make it to Marseille, the racing will be shown live on Canal+ Multisport. Global broadcast details can be found here, and the complementary SailGP APP is available in the Apple and Google Play stores.

The SailGP Fan Zone is located on the J4 Esplanade, in the Old Port of Marseille, in front of the iconic MuCEM museum. The free Fan Zone will offer plenty for the public to enjoy, with the newly introduced SailGP Inspire program providing a host of activities, live broadcast on big screens, race commentary, a presentation stage, the SailGP Fan Shop, and food and beverage.

For the first time in Marseille history, the offshore Seawall has been completely redesigned with the support of the harbor of Marseille, and will host a large spectator stand, placing fans at the edge of the action.

The Rade Nord racecourse will not be directly visible from the SailGP Fan Zone, so fans wishing to watch the racing live will need to head to the Seawall spectator area for a ringside seat or out on the water on one of the official spectator boats.

Three ticket categories are available on the Seawall, starting from 25€ for the ‘Seawall Standard’ offer. All tickets include a complimentary boat shuttle to the Seawall, as well as live commentary and big screens. The ‘Seawall Grandstand’ ticket allows exclusive access to the Grandstand, while ‘Seawall Gold’ offers a premium experience with complimentary food and beverage, and lounge seating to enjoy the racing.

For fans wanting to share the water with the F50s, SailGP has exclusively partnered with Icard Maritime to provide two on-water experiences – SailGP Cruise Select and SailGP Cruise Premier.

VNR available from the first day of F50 sailing in Marseille including drone footage and interviews with Billy Besson and Marie Riou.