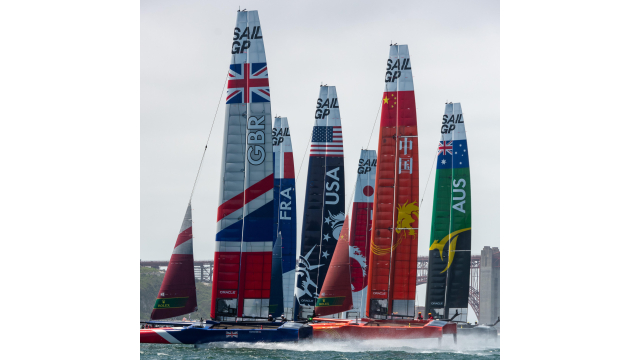 The fleet of six F50s light up San Francisco Bay

Japan dominates in front of a sell-out crowd

San Francisco Bay delivered on the opening day of SailGP, in which a sell-out crowd, seated just 200 meters from the finish line, saw the Japanese team dominate.

The fleet of six…
Video

SAN FRANCISCO – May 4, 2019 – San Francisco Bay delivered on the opening day of SailGP, in which a sell-out crowd, seated just 200 meters from the finish line, saw the Japanese team dominate.

After a week of intense training featuring highs and lows, with the Chinese chances of competing in the weekend nearly crushed earlier in the week, the six teams were raring to go and showcase the high-speed F50s on the iconic San Francisco Bay.

In a style of racing that had never been seen before on the shores of San Francisco Bay, with boats inches apart racing at incredible speeds, regularly exceeding 45 knots, three races took place with many thrilling moments and close calls.

One team managed to master the challenging conditions, which included regular gusts of 20 knots, with the Japan SailGP Team, helmed by Nathan Outteridge, winning all three races to top the leaderboard at the end of the first day.

“I thought it was very tight racing today. It was fantastic out there and I am super proud of the team, who did a great job. We made a couple of errors here and there but clawed back in those races and couldn’t have asked for a better day,” said Outteridge. “We know it’s still only halfway, and we have to do the job tomorrow, but all the training and hard work is paying off, which feels great.”

Hot on the Japanese team’s heels was the green and gold of the Australian team – helmed by Olympic champion Tom Slingsby – and the British team under the control of Dylan Fletcher. Both pushed the Japanese team in all three races but couldn’t quite get the competitive edge.

“I couldn’t believe how close the racing was and how intense it was on the first reach. If anyone crashed, it would have been pretty major,” said Fletcher. “That intensity is why we sail these boats, and it was just literally the best racing of my life.”

One team that was also pushing hard wanting to please the home crowd was the young guns of the U.S. team. After concentrating on their boat handing in practice racing, they made impressive moves up the leaderboard. A third place finish in the second race of the day positioned them just short of the podium in fourth place at the end of the first day.

“100 percent it was tight racing. We had a close call at the finish with the British and were literally inches away from their transom,” said United States SailGP Team helm Rome Kirby. “It was definitely tough out there, one mistake and you get punished. We made a few mistakes today but learned a lot and we will keep improving and keep getting better. It was a solid day for us.”

Sunday’s racing will consist of two fleet races before a final showdown, when the top two teams will go head to head in a match race to crown the winner of San Francisco SailGP.

With teams returning to their respective bases tonight, the team analysts will be working hard to review all the data overnight in the hopes of finding the key to unlock the Japanese team’s lead.

Tune in on the SailGP APP to watch tomorrow’s racing live on iOS and Android or head to SailGP.com/Watch for global broadcast information.