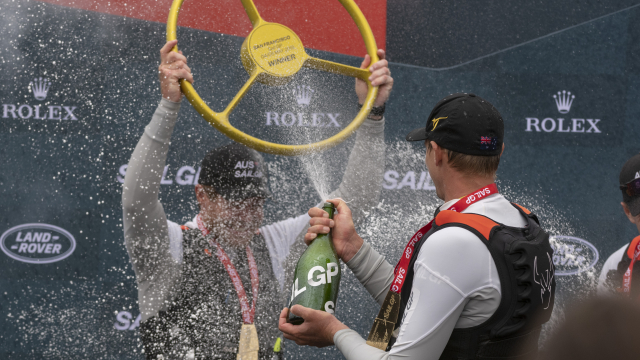 Thousands of spectators waved their favorite teams’ colors from the packed Marina Yacht Club Peninsula Race Village as they witnessed the Australia SailGP Team repeat as champions with victory over Japan, to win the U.S. debut of SailGP. 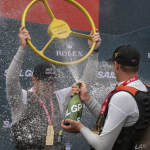 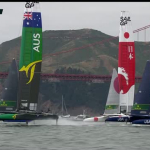 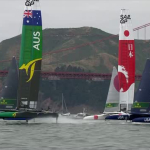 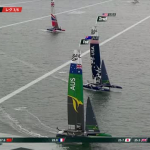 SAN FRANCISCO – May 5, 2019 – Thousands of spectators waved their favorite teams’ colors from the packed Marina Yacht Club Peninsula Race Village as they witnessed the Australia SailGP Team repeat as champions with victory over Japan, to win the U.S. debut of SailGP.

After two full days of thrilling racing at San Francisco SailGP, the Australia SailGP Team, helmed by Olympic gold medalist Tom Slingsby, took the top honor. Proving the ultimate come-back kids after struggling in training and a disappointing day of racing on Saturday, they defeated the Japanese team in the final match race to win the event and go two points up in the overall season rankings and a step closer to the $1 million prize.

San Francisco Bay lived up to its name this weekend, delivering spectacular conditions that provided the ultimate test of skill and stamina for the elite athletes racing on the world’s fastest race boats. Fans had a courtside seat to the speed and drama, witnessing speeds of over 45 knots literally just off the shore.

“We’re stoked, it’s no secret that we struggled all week. Nathan Outteridge and his team were better, but we kept saying we are going to come back. We left it late, but we did come back and won the match race and then the event,” said Slingsby.

After dominating the opening day, winning all three races in an impressive showing, Outteridge’s team couldn’t hold off Slingsby’s charge. Despite a close battle in the final match race, Outteridge later noted that a software issue meant that they were ‘sailing blind’ around the race course.

“As soon as something doesn’t work, it makes it very hard, it’s like asking a race car driver to drive a car where the brakes aren’t working,” said Outteridge. “The last race we lost the display software that tells us the time to the start, time to boundaries, shows a diagram of where you are on the course, so we raced the last race blind. Considering all that happened today, to still come second here and still pushing hard is great. Yesterday was the highlight for our team so far.”

With two wins out of two, the Australian team takes top spot on the overall Season 1 leaderboard, with just two points separating the top two teams going into the next event in New York, June 21-22.

Taking its first SailGP race win, Great Britain was one of the standout performers of the weekend, finishing third overall and maintaining the same position on the overall leaderboard.

One team that will be glad of a second chance to take a win on home soil is the young U.S. team. Having improved significantly going into the weekend, finishing just off the podium in fourth place, they are hungry to improve.

“We are going to go back again and go through the data, look at everything we learned and keep building on that,” said U.S. helm Rome Kirby. “We want to keep the learning curve going and keep progressing. It’s time to hit the books ahead of New York.”

“San Francisco was everything we hoped it would be. It provided a spectacular backdrop for our U.S. debut, a fantastic challenge for our world class athletes and an exciting spectacle for the fans,” said SailGP CEO Russell Coutts. “All of the teams have really stepped up a gear and it shows what effect the open access to data is having on the teams’ performance. It’s certainly going to make the next event in New York even more exciting.”

SailGP next heads to New York over the weekend of June 21-22, where the iconic city skyline will serve as the background for what’s sure to be another exciting stop for new global league.