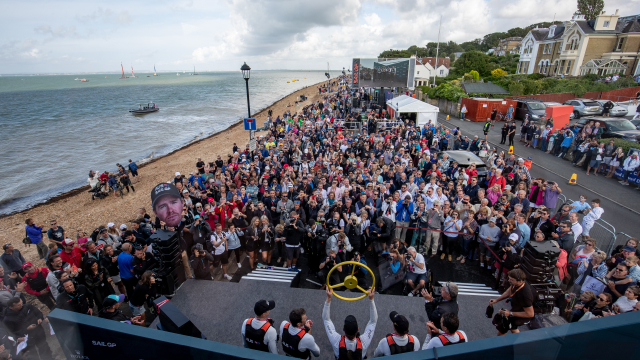 Tom Slingsby AUS lifts the trophy at The Adrenaline Lounge.

In extreme conditions at the European debut of SailGP, Australia’s Tom Slingsby proved once again that he is the one to beat in the league’s first season. The Australia SailGP Team dominated the field with a sweep of the races while becoming the first crew to break the 50-knot speed barrier in sail racing. Meanwhile, Rome Kirby’s U.S SailGP Team capsized in dramatic fashion and Dylan Fletcher and the British team took a violent nose dive resulting in boat damage that prevented them from finishing racing. 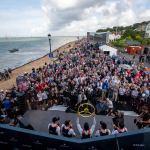 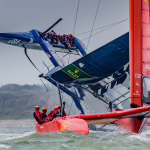 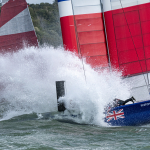 COWES, UK – August 11, 2019 – In extreme conditions at the European debut of SailGP, Australia’s Tom Slingsby proved once again that he is the one to beat in the league’s first season. The Australia SailGP Team dominated the field with a sweep of the races while becoming the first crew to break the 50-knot speed barrier in sail racing. Meanwhile, Rome Kirby’s U.S SailGP Team capsized in dramatic fashion and Dylan Fletcher and the British team took a violent nose dive resulting in boat damage that prevented them from finishing racing.

The stakes were higher than ever on the first and only day of racing in Cowes, as the last chance for teams to put points on the leaderboard before the final in Marseille, where the SailGP championship trophy and $1 million awaits the season winner.

In front of a packed crowd at the SailGP Race Village at Egypt Point, Slingsby set a new sail racing speed record, clocking in at 50.0 knots while crossing the finish line of the first race. It marked the first time in sail racing history that a boat broke the 50-knot speed barrier.

Earlier in the week, the Australian team sustained damage to its wing in practice and was unsure whether it would be able to race today, but Sunday morning saw all damage repaired and Slingsby raring to go. The team, which only had a couple hours of practice in its boat this week, made a deal with the French, who loaned the Aussies their boat in exchange for some training with Slingsby onboard.

“We were on the start today with a couple of hours sailing compared to a lot more sailing from a lot of the other teams. I was definitely worried,” said Slingsby. “It was hairy out there. It might have looked easy, but it definitely wasn’t. We just did our best and concentrated on ourselves. We heard other teams were having issues and it could have so easily happened to us.”

The United States SailGP Team capsized within 30 seconds of the start of race one, but surprisingly was able to compete in the rest of the day’s racing with quick assistance from the SailGP tech team. Despite a tough day, Kirby’s American team was able to climb the leaderboard for third place overall.

The Great Britain SailGP Team wasn’t as lucky. On the penultimate leg of the first race, the team dug its bow into the water, sending flight controller Chris Draper tumbling over Stuart Bithell in a dramatic crash. No injuries were sustained, however, the boat was too damaged to sail for the remainder of the day. Fletcher was massively disappointed, having had high hopes at his home event after breaking the 50-knot barrier and winning two of two practice races earlier in the week.

“We were sat there before the start of the racing watching the floods of crowd come in, it was amazing to see all that support and we were really looking forward to going racing,” said Fletcher. “Then, when we went bow down and that was us, game over for the day. We are so disappointed for ourselves but also the fans that came out to support us.”

Teaming up with the Australians paid off for Billy Besson and the French squad, which had its highest score yet, finishing second in the last race of the day, ahead of Japan and the United States.

“It was good for the moral, the work we did the last week here in Cowes was really great and we did a great job,” said Besson. “We will be pushing more for the last event in Marseille.”

Phil Robertson of the China SailGP Team also had his best finish yet on the Cowes racecourse, with a second-place race finish and third overall placing, making serious gains in stability and speed since New York.

“Wild...that was an absolutely crazy day,” said Phil Robertson. “The team is pretty happy with how we finished up, it was a pretty good day all in all. The big thing we learned this week was how to handle the boat a bit better and how to keep the boat safe as well on days like today.”

Nathan Outteridge was at the top of the leaderboard, one point ahead of the Australians going into Cowes, but, by the end of the day, the team was trying to hold its own and keep the boat in one piece. A crash down from the foils in race one caused Japan to break one of its grinding pedestals, drastically decreasing performance. Outteridge will have to close a gap of four points to be on par with Slingsby in Marseille.

“The main thing looking ahead to Marseille is to make the match race, and the goal will be to win that match race,” said Outteridge. “Today was a big step for us in securing that. Yes, we didn’t beat the Australians, we didn’t take a race off them here, but we extended our overall lead on the Americans.”

SailGP’s final stop for Season 1 is in Marseille. Fans can expect the racing to be fierce, with three full days of competition planned, an ultimate winner-takes-all match race for the SailGP championship trophy and $1 million purse.

TRANSCRIPT of the interviews is available to download here.