Global championship brings world’s fastest sail racing back to the Bay for first U.S. event of Season 2 on May 2-3

Tickets are now on sale for the return of the world’s fastest sail racing to San Francisco Bay. Teams from seven nations – including three helmed by Olympic champions – will take to U.S. waters for the first time in SailGP Season 2 with enhanced supercharged F50 catamarans predicted to break additional speed records over the two-day grand prix event, set for May 2-3. 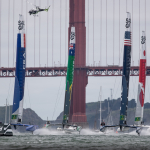 SAN FRANCISCO – January 30, 2020 – Tickets are now on sale for the return of the world’s fastest sail racing to San Francisco Bay. Teams from seven nations – including three helmed by Olympic champions – will take to U.S. waters for the first time in SailGP Season 2 with enhanced supercharged F50 catamarans predicted to break additional speed records over the two-day grand prix event, set for May 2-3.

Fans can secure their shoreside or on-water seats – offered at a 10 percent discount through February 26 – via Ticketmaster to San Francisco SailGP, during which Rome Kirby’s American crew will be joined by defending champion Australia, as well as fellow returnees France, Great Britain and Japan, and new entrants Denmark and Spain.

San Francisco SailGP will take place in one of the world’s most thrilling on-water venues on both Saturday and Sunday afternoon just east of the Golden Gate Bridge, on the northern shores of the city. Three races will be staged each day, including a title match race finale on day two to determine the event winner. Early bird tickets to the annual international event start at $45.

Onshore ticket holders will enjoy a breathtaking view of the racecourse from an exclusive position in front of the finish line, while on-water experiences via the iconic Red and White Fleet will put fans in the center of the heart-pumping racing. A first-time offering for 2020, a two-day land and sea package will provide the best of both ticketing options, with a combination of shoreside and on-water access to the high-flying action.

In addition to seeing stars such as Kirby, Tom Slingsby (AUS) and Ben Ainslie (GBR) battle for points critical to winning the season-ending prize of US$1 million, fans in San Francisco will be treated to the debut of revolutionary new wings on each of the seven F50s. The first-of-its-kind modular wingsail will be able to shorten from 24 to 18 meters, allowing the boats to race in strong winds at likely record-breaking speeds.

Kirby said: “There’s literally no better sailing venue in the world than San Francisco Bay. With the increase in performance we’re expecting this season, we’ll be blasting past the Marina District at speeds never before seen in the sport. Get your tickets for the front row, you’re in for a show.”

The 2019 San Francisco SailGP attracted more than 22,000 spectators from 22 nations and reached more than 327 million people worldwide. Following the 2020 event, the global championship will head to New York and Cowes (UK), with the remainder of the Season 2 schedule to be announced in February.

Tickets
Two categories of land-based tickets are available – Access and Premium – with an exclusive viewing position of the racing on San Francisco Bay. The ticketed area along the northern shoreline of the Marina District on the water’s edge provides a front-row view of the racecourse finish line, with the F50s nearly grazing the shore at the culmination of each of the six high-speed races.

Both ticket categories offer the only opportunity to view racing from the water’s edge at the finish line. Access  – starting at $45 during the early bird window – includes a seating area, audio commentary, and dedicated food and beverage for purchase. The enhanced Premium experience – starting at $113 until February 26 – features elevated grandstand seating and large screen with live race footage, and includes food, beer, wine and the SailGP signature cocktail.

The ticketed viewing area will also offer live pre- and post-race entertainment, including a DJ and stage presentations.

In partnership with Red and White Fleet, on-water tickets are also offered at two levels, departing from San Francisco’s Pier 43 ½. The event’s most exclusive ticket features a premium open bar and gourmet food on the Enhydra, the greenest large excursion boat in the United States. On-Water Go Premium tickets – starting at $199 during early bird pricing – offer the closest spectator vantage point, with a viewing position inside the racecourse perimeter for fans to witness the F50s fly by at break-neck speeds never before seen in the sport. Live race footage, an onboard commentator and a SailGP commemorative item are also included in the Premium category.

All tickets are also offered as two-day passes, with savings of up to $60 for the second day.

Fans planning to take in the action from their own boat may register for the complimentary Boater Program at SailGP.com/SanFrancisco to receive special access to race information.