SailGP touches down on UK waters 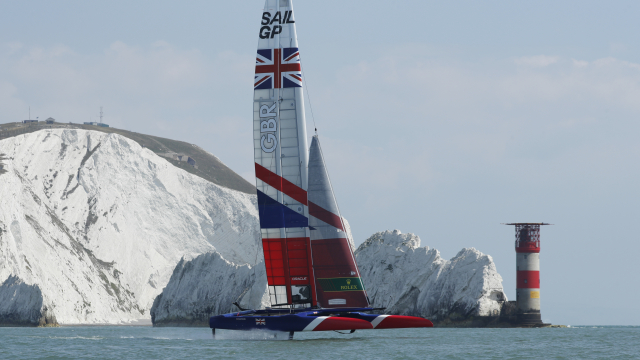 The Great Britain SailGP Team hit the water for the first time today, sailing past The Needles, ahea

With just over one week to the European debut of SailGP in Cowes, the Great Britain SailGP Team was the first of the six national teams to take to the water. Sailing down to the iconic Needles, the Isle of Wight’s most famous landmark off the western point of the island, the team gave a glimpse of the speed and excitement expected when the fastest sail racing boats in the world go head to head at Cowes SailGP on August 10 and 11. 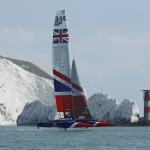 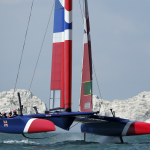 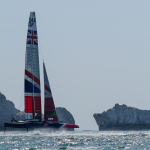 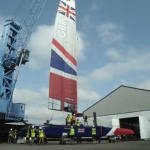 COWES, England – August 2, 2019 – With just over one week to the European debut of SailGP in Cowes, the Great Britain SailGP Team was the first of the six national teams to take to the water. Sailing down to the iconic Needles, the Isle of Wight’s most famous landmark off the western point of the island, the team gave a glimpse of the speed and excitement expected when the fastest sail racing boats in the world go head to head at Cowes SailGP on August 10 and 11.

After competing around the world in Sydney, San Francisco and New York, the new global sports league is visiting Cowes on the Isle of Wight for the penultimate event of the inaugural season, which sees the winning team walk away with a $1 million prize.

With new technical upgrades onboard the one-design flying boats, the revolutionary F50 catamarans are expected to hit the highest speeds yet seen this season, with the teams predicted to break the 50-knot speed barrier (60 mph) on the Solent.

The Great Britain SailGP Team will be looking to continue the successful British summer of sport. Currently sitting in third place overall, the Brits will be seeking redemption after a dramatic capsize in New York and hungry to win races in front of home crowds. Great Britain will have tough competition from overall season leader Japan, helmed by Olympic champion Nathan Outteridge, and his long-time rival Tom Slingsby of the Australia SailGP Team.

“It’s quite a moment and felt fantastic to finally sail on home shores today,” said Dylan Fletcher, Great Britain SailGP Team helmsman. “This is the first time that sailing of this kind has come to the UK and it’s really exciting for the whole team to showcase these boats in front of a home crowd. We just hope that the fans come out in force to cheer us on and check it out for themselves.”

“Cowes is an iconic sailing venue and many great events have been contested off the Isle of Wight,” said SailGP CEO Sir Russell Coutts. “We should prepare ourselves for some spectacular racing. It’s one thing to see it on a screen, but another when you see these boats racing around marks metres from the shore. We know Australia and Japan are the teams to beat, but I expect Great Britain to be firing here and I wouldn’t be surprised if they are winning races and even contending for the final match race. I can’t wait to see how this event plays out.”

SailGP is redefining the sport, offering the next generation of high-adrenaline, competitive sailing. Bringing the sport closer to fans than ever before, spectators will be afforded the opportunity to witness the action up close as teams representing Australia, China, France, Great Britain, Japan and the United States battle for maximum championship points on August 10 and 11.

For the first time in the UK, racing will be live on the SailGP APP. In addition to watching on BT Sport, fans can download the next generation mobile application, giving an unprecedented insight into the revolutionary new sailing league. Along with watching the live racing, the SailGP APP allows fans to view live data and video, track performance, compare athletes, change viewing angles, zoom in on the action and watch replays - bringing them closer to the sport than ever before.

Coming to the UK for the first time marks a special moment in time for the Great Britain SailGP Team as Cowes is home to the oldest and largest annual sailing regatta in the world, expecting up to 100,000 spectators throughout the week. As an Official Feature Event of Cowes Week, Cowes SailGP will bring an added level of excitement to the event with supercharged wingsailed catamarans racing in close-quarters at speeds potentially exceeding 50 knots, just off Cowes. The Cowes SailGP Race Village will run along the seafront from the end of the Cowes Green up to Egypt Point. Activities in the Race Village start from 11:30 a.m. each day, with the races taking place from 3-4:30 p.m. on Saturday and Sunday.

Ahead of the spectacular racing, an exciting pre-show will take place, when local sailors will have the chance to share the waters with the F50s and showcase their talents in front of the SailGP Grandstand. Working with the Royal Yachting Association and the United Kingdom Sailing Academy, the young sailors will go head to head as part of the SailGP Inspire programme - SailGP’s community outreach initiative that aims to use sailing as a force for good - which launches at the event. Additionally, with the support of the UKSA, SailGP Inspire will be offering opportunities for local youngsters from the Isle of Wight to take part in shore-based experiential activities and on-water sessions in the lead up to the weekend. Visitors to the SailGP Race Village will also be able to enjoy the Inspire exhibits.

On Friday, August 9, fans will be able to see the teams hit the racecourse for the first time, for the official practise racing, sharing the Solent with royalty. The teams will race following the King’s Cup – a major sailing event hosted by the Duke and Duchess of Cambridge in support of their charitable causes – taking place off the SailGP Race Village from 10 a.m.-12 p.m.

SailGP offers two ticketed options for front-row seats to the action and unrivalled views of the racecourse. Fans who want to get as close to the Saturday racing as possible can purchase tickets for the Cowes SailGP Cruise Premier for a premium on-water experience. Those who would prefer to stay on shore, can enjoy the action from the SailGP Grandstandin the heart of the Race Village. SailGP also offers a complimentaryboater registration programme for fans wishing to watch the action from the comfort of their own boat in spectator zones on the racecourse perimetre. Registrants will receive important race management information, schedules and the latest race maps, as well as a commemorative Cowes SailGP boat flag.

VNR available from the first day of sailing on the Solent including drone footage from The Needles and an interview with Chris Draper.