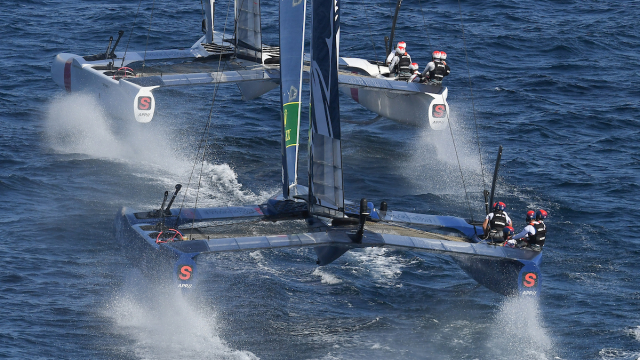 As SailGP prepares to kick off its second season in 2020, the global championship continues to be recognized for its successful debut. Today, the F50 catamaran – the fastest sail race boat in the world – was honored as World Sailing’s 2019 Goslings Boat of the Year, praised for its innovative concepts and ground-breaking technological advancements that are changing the face of the sport across the globe. 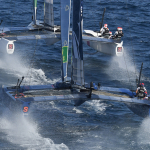 LONDON – October 29, 2019 – As SailGP prepares to kick off its second season in 2020, the global championship continues to be recognized for its successful debut. Today, the F50 catamaran – the fastest sail race boat in the world – was honored as World Sailing’s 2019 Goslings Boat of the Year, praised for its innovative concepts and ground-breaking technological advancements that are changing the face of the sport across the globe.

The World Sailing Awards celebrate outstanding achievement and exceptional contributions to the sport of sailing and took place at the World Sailing Annual Conference in Bermuda. SailGP was also shortlisted in two other categories – the World Sailing 11th Hour Racing Sustainability Award and the Hempel Team of the Year Award, which recognized the Australia SailGP Team’s performance in Season 1.

The SailGP rules mandate that each team race with equal technology. The SailGP design and build team are thus able to introduce new developments during a season however, these must be applied equally across all teams.  Throughout the five grand prix events in Season 1, there were a number of highlights for the new global league with the F50s reaching speeds never seen before in competition. Memorable moments included Tom Slingsby’s Australia team making history by breaking the 50-knot speed barrier in competition during the Cowes event, capsizes by the U.S. and British teams in New York and Cowes, and a dramatic SailGP Season 1 Championship Final Race, in which the final duel came down to a mere 78 centimeters at a crucial moment on the racecourse before the Australian team earned the inaugural victory.

“Coming off the back of a successful first season of SailGP, it is great validation to see years of strategic development and execution be recognized across the industry with the F50 taking home this accolade,” said SailGP CEO Sir Russell Coutts. “The F50s produced some spectacular racing and we ended the season with all teams winning at least one race. The continuous development and innovation, incredible speeds and close nation against nation racing helps to set us apart. The incredible performance of the F50 plays a critical role in delivering an unmatched sporting experience to a global audience.”

Industry veteran Mike Drummond was brought on by SailGP to lead the design innovations around the F50, working in consultation with some of the most respected names in foil and aerodynamic design to develop the cutting-edge technology. The construction of the F50 was carried out by Core Composites in New Zealand and required 135,000 people hours to ensure the fleet of six F50s was ready for SailGP Season 1, with three of the boats being completely new builds.

The F50 was awarded the Boat of the Year prize as it is undergoing exciting design and engineering updates to ensure it stays at the forefront of the sport. Currently, revolutionary new modular wingsails are under construction. A first-of-its-kind system, the wing comprises of four modular sections that vary in size and can be constructed together in different combinations to produce a wingsail of varying lengths, from 18 meters at its shortest, to 29 meters high, to enable the F50s to compete in a wide range of weather conditions. The smallest wing configuration, at 18 meters, is made up of just two of the sections, helping to make the F50 more manageable but faster in stronger winds. By combining all four of the modular wing sections, the wing expands to 29 meters high, five meters taller than existed for Season 1, and will improve performance in lighter winds.

In total, three different sizes of wingsail can be outfitted and swapped overnight to ensure the teams have the best set-up for the conditions. In all configurations, the sections have a bolting detail for the structural connection, while hydraulic and electronic systems have quick connect features at the end of each section to allow for quick assembly and disassembly. Staying true to the one-design philosophy, the boats will always compete with the same configuration of wingsail. In addition to being able to sail in a broader spectrum of wind speeds and conditions, thus opening up additional venue options for SailGP to compete in, vital weight savings have been achieved, with a more advanced structure and the removal of rigging and cables inside the wing’s hollow structure, adding to additional performance gains in light winds. The new wings will debut at San Francisco SailGP, May 2-3, 2020.

A seventh boat is also under construction and new foils are being tested during the off-season. Sea trials will take place in December with a short sailing period for the teams in January ahead of SailGP Season 2, which gets underway in four months. Unlike most one-design classes, SailGP designers and engineers are constantly looking for ways to improve and evolve the F50 to continuously increase performance and ensure the boats remain cutting-edge.